Gruit is a drink from olden times, a drink much like beer, but made without the use of hops. Instead of hops, bittering herbs of different varieties were used, and there is evidence to support the idea that beer without hops is a different and livelier experience on many levels. Gruit was swept under the rug when beer purity laws ravaged the brewers of Europe in the 1500s, but is now making a revival. 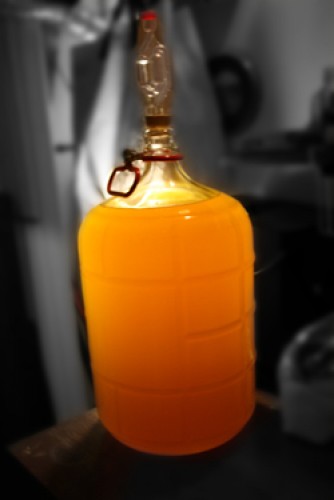 Before the beer purity laws which swept Europe in the 1500s, beer was made with many different admixtures, and Gruit was one variety which was popular. Recipes for gruit were different depending on which herbs grew locally. According to GruitAle.com, gruit usually included the following herbs: Yarrow (Achillea millefolium), Bog Myrtle (Myrica Gale), and Marsh Rosemary (Ledum palustre). This claim is also supported by the book Sacred & Healing Herbal Beers, by Stephen Harrod Buhner. This book contains many ancient recipes for beer, including a section on gruit. Additional herbs which have been found in gruit recipes are Juniper berries, Mugwort, Wormwood, Labrador Tea, Heather, Licorice, and some others.

There are a few factors to consider when comparing the inebriatory qualities of gruit in comparison to more commonly made beer. It is held amongst those experienced in gruit inebriation that gruit rivals hopped beer on many accounts. One factor is that hops create a sedentary spirit in the imbiber. Amongst those knowledgeable about herbs, hops tea is well known as a catalyst for dreams, and creates drowsiness for the beer drinker. Hops is also an anaphradesiacal herb – meaning that it lessens sexual desire. While the alcohol in beer can lessen inhibitions – which may result in bawdier activities in many – the anaphradesiacal effect of the hops does counter act this to some degree. Gruit, on the other hand, does not counter this effect and also has a unique inebriatory effect due to the chemical composition of the herbs involved in its manufacture. One of noticeable aspect of this chemical composition is the Thujone content.

Thujones are chemicals known as alkaloids, which cause an additional form of inebriation when imbibed in beer. According to Jonathan Ott's book, Pharmaecotheon I, Thujones act upon some of the same receptors in the brain as tetrahydrocannabinol (THC, as found in Marijuana), and are also present in the spirit known as Absinthe. Gruit and Absinthe sometimes share the same herbs in their manufacture, such as Wormwood, Anise seed, and Nutmeg, but it is the herb Yarrow (Achilles Millefolium) that contains the lion's share of thujones in the gruit concoction.

Yarrow is an herb with many uses and plays a profound part in history and myth. According to Buhner, its use can be traced back 60,000 years. Through many different cultures, from Dakota to ancient Romans, Yarrow has been used to staunch serious wounds – it is even rumored to have been used by Achilles (hence the name Achilles Millefolium, the thousand leaved plant of Achilles). According to Buhner, the plants aphrodisiacal qualities are also documented in the Navaho culture. As an inebriant, it has been used in the Scandinavian countries and in North America as well.

Bog Myrtle (Myrica gale) and Wild Rosemary (Ledum glandulosum) also have many uses in the realm of herbalism, but not nearly as many as Yarrow. Both tend to have inebriation enhancing effects in beer, but also tend to cause a headache and probably a wicked hangover, if too much is drunk. The use of Bog Myrtle in ale was continued through the 1940s in Europe and the 1950s in outlying areas of England and the Scandinavian countries – Wild Rosemary probably through the 18th century.

Although some traditionally made non-hopped ales have survived the pervasiveness of hops in the world of beer, the craft of making gruit has largely been out of practice. But, in the golden age of craft ales in which we live, we can see a re-newed interest in this ancient ale and others like it. Namely, beer made without hops: Williams Brothers brewery's Fraoch, a revival of an ancient Scottish recipe, uses heather, sweet gale, and ginger. Belgium brewery Proefbrouwerji's Gageleer uses sweet gale. England's Lancelot brewery has mixed styles with their Cervoise, containing heather as well as hops. I think we will see more herbal beers in the coming days that will open the world of beer to more and more unique forms of inebriation.